Scheduled to open in 2020, the resort will have 83 hotel rooms and 20 apartments.

Vladislav Doronin, the chairman and chief executive officer of Aman Resorts, the super-luxury hotel chain, is standing in the middle of a filthy concrete husk of a room in midtown Manhattan. “Look at this!” he says, gesturing through the dirt-stained windows of the 24th floor of the Crown Building, whose 4th through 26th stories he’d purchased with a partner for about $500 million in 2015. (The bottom three stories, which are for retail, are owned by other companies.)

“It’s not just the location,” he says, nodding to the fact that the Fifth Avenue building is on one of the most expensive, if not sought-after blocks in the world. It’s also the view. “I prefer to stay here, closer to the ground, to see real New York,” he says. “If you were on the 70th floor of some building, you’d just see clouds.”

To the right, across Fifth Avenue, is Trump Tower. The Plaza Hotel is visible to the left, and directly north, over the roof of the Bergdorf Goodman department store, a visitor can see an expansive stretch of Central Park.

In less than three years, Doronin plans to transform the building’s interior to match—and surpass—those views.

The fourth through tenth floors of the building will be occupied by New York’s first Aman hotel, which will have 83 hotel rooms, each measuring at least 70 square meters (753 square feet).

The 11th floor and above (which will be developed by Doronin’s U.S. development arm, OKO Group LLC), will be transformed into 20, Aman-branded residences, crowned (pun very much intended) with a five-story, near-14,000-square-foot penthouse that will be priced in excess of $100 million. “When I bought Aman in 2014, the whole goal was to bring Aman into cities,” Doronin says—“to turn Aman from horizontal to vertical.” 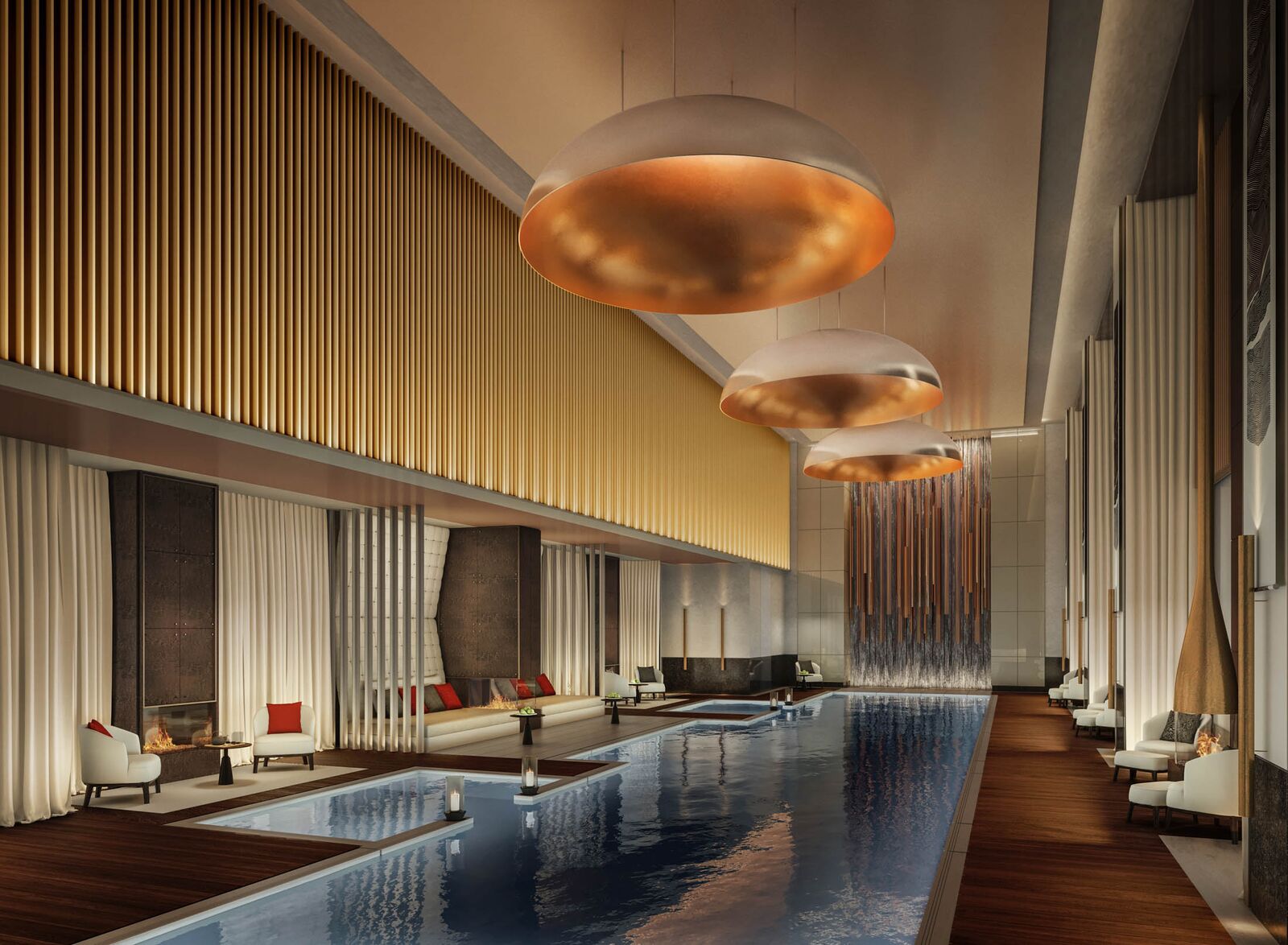 A rendering of the hotel’s spa pool.
Source: Aman Resorts

By that, he’s referring to one of the brand’s primary and enduring allures: For years, very, very wealthy guests would make pilgrimages to Aman resorts perched on top of mountains in Greece, in canyons in Utah, or in forests in Bali, where unobtrusive service, a strong emphasis on wellness, and staggeringly expensive nightly rates (easily more than $1,500 a night) were guaranteed to make well-heeled travelers “feel like they are in a private home,” Doronin says. Visitors who have stayed at an Aman resort know this is true—provided the private homes they are accustomed to are filled with servants, chefs, and perfect minimalist furniture.

The urban pulse of a city doesn’t quite fit within that relaxed, decadent ethos, yet Doronin opened an Aman in the heart of Tokyo in 2014 and it was met with almost instantaneous success. “We’re 65 percent more expensive than the average” luxury hotel’s nightly cost, he says. “And we’re always fully booked.”

Encouraged, Doronin has begun to expand into other cities—an Aman is planned outside Shanghai, and Doronin says he’d like to see Amans in London, Paris, and other global cities in addition to New York.

Doronin is betting that the hotel’s amenities will set it apart from the competition. The Aman in New York will have a three-story spa (on its seventh, eighth, and ninth floors), an Aman member’s club, a jazz club, and a cigar bar, all available to residents. The hotel will also have a Japanese restaurant, an Italian restaurant, a piano bar, and a “Wine Library”—all available to the public, but “especially” for residents, Doronin says.

Building a resort in a city is very different than building one in the country. “Any hotel in the city is very expensive” Doronin says, citing the cost of labor, real estate, and construction. 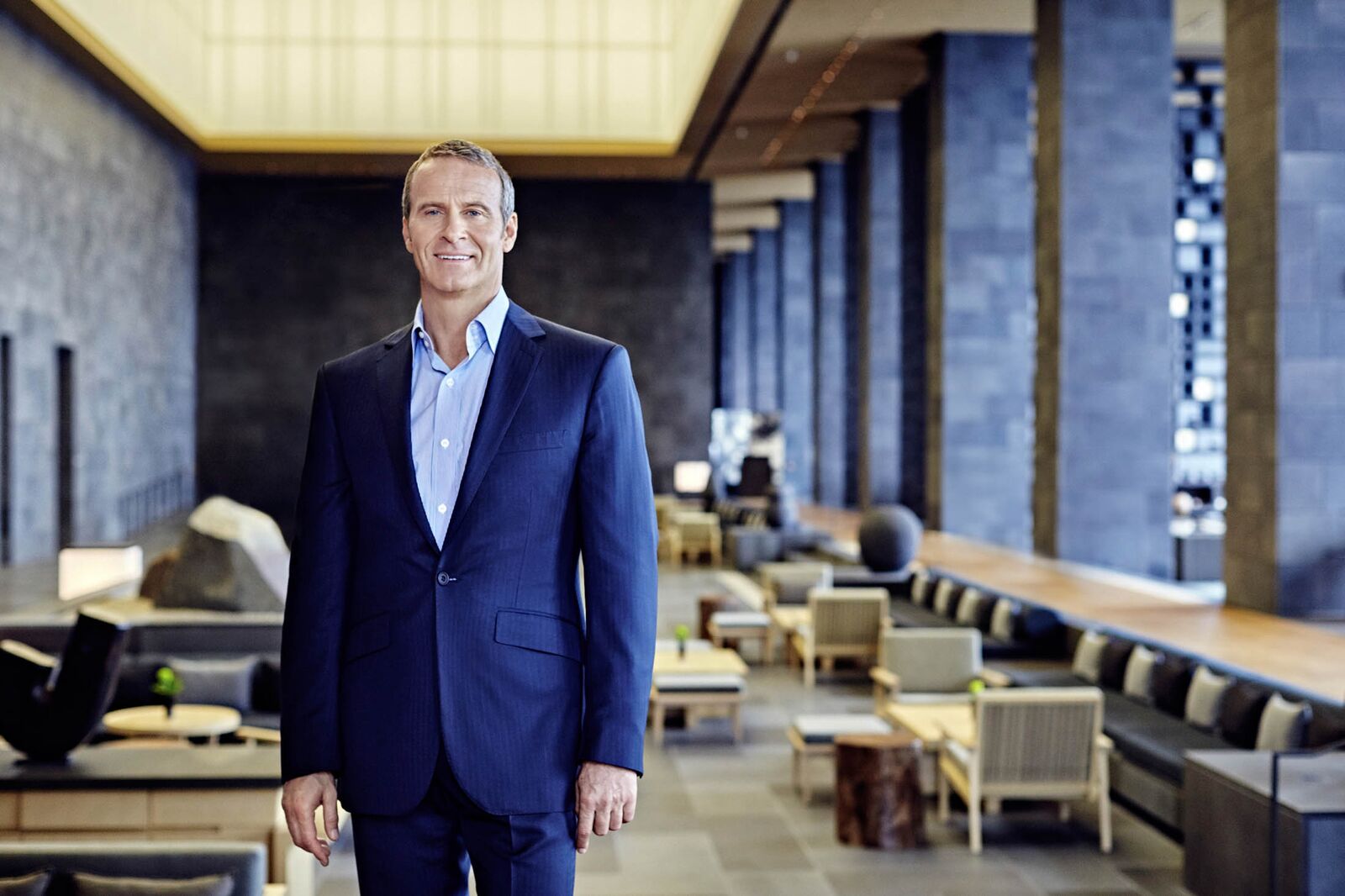 The building’s 20, Aman-branded apartments are priced at a premium, even by New York’s standards.

A 1,149-square-foot one-bedroom, one-bath apartment will cost a hefty $5.9 million. Another one-bedroom, which admittedly will also include a “home office/den/library” and two bathrooms is spread out over 2,109 square feet and will cost a staggering $10.6 million. A three-bedroom, two-bathroom apartment comprising 4,384 square feet will cost $26.6 million. A 6,287-square-foot four-bedroom, five-bathroom apartment near the top of the building (keep in mind that this is not the actual multi-story penthouse) will weigh in at a eyebrow-raising $58.3 million, which is $8 million more than a nearby 6,000-square-foot duplex penthouse atop the Plaza Hotel and actually facing Central Park.

The price of the penthouse itself hasn’t yet been released, but given that the four-bedroom apartment costs more than $9,000 a square foot, it’s safe to assume that the five-story apartment, which will feature both indoor and outdoor pools, will cost in excess of $100 million.

Jean-Michel Gathy is designing the hotel’s layouts and can be contracted to do residents’ furnishings and interiors, and the hotel’s services—including that famously discreet staff—will also be available to residents. “You will be able to call for a coffee, and the cappuccino will be presented at your door, still hot,” Doronin says.

The building is expected to be complete in 2020, but OKO Group will pre-sell apartments.

The rest of the planned Aman apartments will face similarly stiff competition. Down the block at 57th street, a forest of luxury towers nearing completion will be competing for the same, finite clientele.

Doronin isn’t worried. “This is a unique product,” he says. “I don’t see any competition, because for the moment, we don’t have any similar buildings.” The historic structure, the sterling brand, and the location, he says, will be enough to sell it out. “You can live in this building and don’t need to leave it,” he says. “We’ll have everything.”