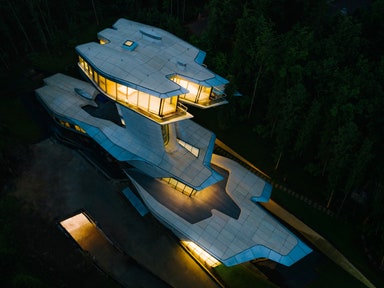 An aerial view of the Capital Hill Residence, a Zaha Hadid-designed private home in a forest near Moscow.

For decades, Zaha Hadid dazzled the world with striking, over-the-top buildings that were designed to be noticed. Her elegantly flamboyant creations seemed to stand out more as a force of nature than a man-made structure. While it's been two years since Hadid's untimely death, a steady drip of her final projects are becoming realized around the globe. Most recently, the Capital Hill Residence (Hadid's only private residential design) was finished in Russia. Yet, unlike her other structures, which were almost exclusively situated in urban environments, the Capital Hill Residence is a neo-futuristic building that stands apart from the thick forest of trees it's surrounded by.

Located roughly two miles west of central Moscow, Russia's Barvikha forest is an unlikely location for any home, let alone one designed by the first female Pritzker Prize winner (incidentally, Hadid's 2004 Pritzker ceremony took place in St. Petersburg). Yet, the Capital Hill Residence was the pipe dream of Russian real estate developer Vladislav Doronin, owner of the 36,000 sq. ft. home. After their first meeting, Doronin knew he had found the architect who had the vision to create his dream home. "I met Zaha in London a decade ago at an event," says Doronin, CEO and owner of Aman Resorts (a luxury hospitality brand) and OKO Group (a U.S.-based real estate development firm). "We were both impressed by and attracted to the works of Kazimir Malevich and El Lissitzky. We spent the rest of the evening speaking about art and design. It was during this meeting I decided I wanted to work with her on a real estate project." 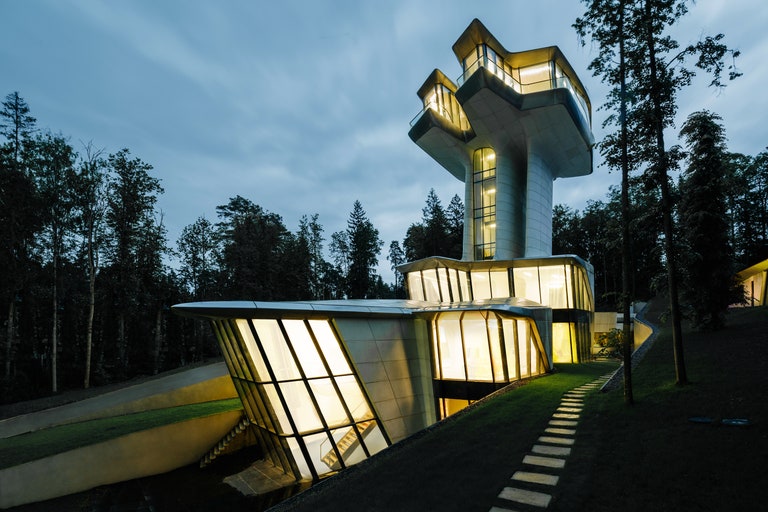 The Capital Hill Residence was built into the forest with much of the structure located underground.

After agreeing on designing Doronin's future home, Hadid first began teasing out her design through a series of renderings. Showing the blueprint of a building to any client is never an easy process, namely due to the high demands that go with hiring a high-profile architect. And, as a seasoned real estate mogul, Doronin is no ordinary patron. "The renderings produced by Zaha were exceptionally detailed and I remember thinking at the time, there is no way the building is going to look like this in reality," says Doronin. Yet, when the structure was completed earlier this year, they were all but identical. "In all my real estate career, I have never seen renderings so true to the final product."

At first glance, Hadid's design appears much like a spaceship that landed and, in an attempt at camouflage, submerged itself within the forest floor. At second glance, the viewer's opinion will likely remain unmoved. But it's upon closer inspection that the fine details begin to show themselves, making the building, like all of Hadid's designs, something to be studied. 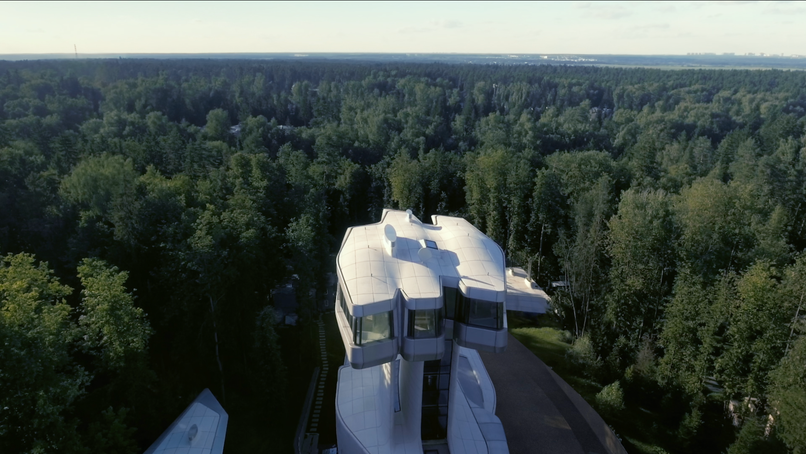 The master bedroom soars some 117 feet above the forest floor to allow for uninhibited views of its natural surrounding.

Doronin wanted to be able to look out his bedroom window and see above the trees, so Hadid granted his wishes in a very abstract way. The master bedroom is what first meets the eye, primarily due to the fact that it rises some 117 feet above the ground, making it the highest point of the home. The master bedroom is connected to the rest of the $140 million home by a slender column, which leads down into various rooms that are above ground. Yet much of the 36,000 sq. ft. home lies beneath the sloping forest floor. It's there that the owner enjoys a 65 foot-long swimming pool, spa, and gym. What's more, the home features such amenities as a Japanese garden and a nightclub. Upon seeing the completed home for the first time, Doronin was completely taken aback. "It was a unique feeling, seeing something you have meticulously planned become reality," he explains. "I have experienced this before with many other projects and seen huge skyscrapers erected, forever changing the skyline, but I couldn’t believe I had managed to build this home together with Zaha."